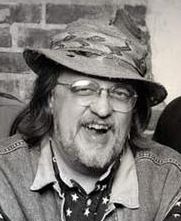 I met with Jim Dickinson in August 1982, at his home in Collierville, Tennessee, just outside of Memphis. It was my first interview field trip, in preparation for my book Go Cat Go ! Rockabilly Music and Its Makers. Jim was articulate and perceptive, and during our conversation, partially presented below, he educated me on some of the details, subtleties, and contradictions of southern music and its social context. Born on November 15, 1941, in Little Rock, Arkansas, Dickinson came of age in Memphis and was young enough to look up to and idolize the emerging rockabilly stars of the ’50s. He became a musician, singing and playing piano on the 1966 Sun recording “Cadillac Man” by the Jesters. He sometimes accompanied rediscovered downhome blues greats Furry Lewis, Bukka White, and Sleepy John Estes. 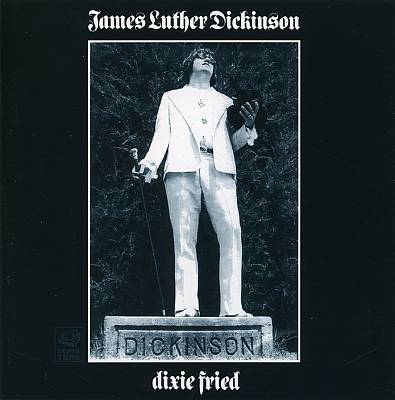 As a session player he backed a host of artists, the Rolling Stones ("Wild Horses") and Aretha Franklin among them. He made his first solo album, called Dixie Fried, in 1972 for Atlantic, and later did six more, plus three fronting Mud Boy and the Neutrons. Dickinson toured and recorded for years with Ry Cooder, and is celebrated for his work as a producer, for Big Star, the Replacements, Toots Hibbert, Tav Falco’s Panther Burns, Albert King, John Hiatt, and countless others. In Bob Dylan’s Grammy acceptance speech for Time Out of Mind, the 1997 album on which Dickinson played, Dylan called him “my brother.” Dickinson sometimes worked with his sons Cody and Luther of the band North Mississippi Allstars. He died August 15, 2009, following heart surgery. It made international news ; I read it in a French newspaper in Marseille.

Jim Dickinson : Before the release of Jerry Lee Lewis’ first record, he was playing with a trio on Wink Martindale’s Dance Party [a Memphis TV show]. The kids who were there dancing laughed at him because he was playing the piano, and within three weeks, of course, he was a hit. But the local market was that open then because Sam [Phillips, owner of the Sun label] would get his records on the radio before they were even pressed. In a lot of cases, I think it probably affected the release. I think some things were not released that might have been had they gone over better on the air. Dewey Phillips [legendary Memphis disc jockey, no relation to Sam Phillips] openly made fun of records he played. He’d start a record and take it off if he didn’t like it. And if Dewey Phillips didn’t like it, most people didn’t like it !

In rockabilly, you’ve got all the same problems of non-compromise that you have in blues. There’s a big difference between a real blues record and a novelty blues record. I think you’ve got the same vast grey area in rockabilly where now a lot of things are considered good or as equal to other things that really weren’t. There were even here in Memphis, only about five or six real rockabilly people. Not to detract from Elvis, certainly Elvis was a big part of it, but there were those other people looking for it and reaching for it that got there.

Craig Morrison : Who do you think they were ?

JD : Of the Sun artists, Orbison’s probably the furthest one out, but I think it was still rockabilly that Orbison was doing. Billy Lee Riley certainly, Sonny Burgess certainly, Warren Smith certainly ; Carl Perkins made some rockabilly records. He’s almost like Charlie Feathers ; it’s hard to psychologically really understand what he must’ve been trying to do. Feathers is more billy than rock, God knows, but he can hit on it.

There’s a real musical genre in rockabilly, it’s not just a production technique, which is what it’s become : if you’ve got slapback [a form of echo] on it and if you’re singing about your shoes or your car or some b.s. like that and you’re hiccupping a little bit ; you’ve got an acoustic guitar and an electric guitar and an upright bass, it’s a rockabilly record. Well not then it wasn’t !

The first two Johnny Burnette records [from 1956] were as rockabilly as anything ever was : "Tear It Up" and "Undecided," and "Train Kept A-Rollin’" and "Honey Hush." I think rockabilly moved on to rock and roll real fast and I think Johnny Burnette almost bridged the gap then. He went on to do pure crap [referring to Burnette’s teen idol material such as "You’re Sixteen"] as a lot of them did, because there was an angry quality, arrogance for sure, that had to be there that was unpleasant and abrasive. And anybody who was seeking to please the public was going to eventually stop doing rockabilly. You’ve got to be somebody like Jerry Lee Lewis to want to continue to do something that’s that unappealing, really.

CM : Well it sold records so it must have been appealing.

JD : It sold records for a while until rock and roll was there. Until there was a really defined white area of beat music. Some of them will still admit it, that a lot of the real rockabilly artists were uncomfortable doing what they did and didn’t feel, well, didn’t have the best racial motives themselves. Some of these guys had no great love for any black art. I think it was just part of the early ’50s, really God knows why they were doing exactly what they were doing. I don’t know whether it was a disenchantment with country music, but a lot of these guys are just country musicians who’ve started doing something else, who went across. It was a definite feeling in a certain type of red-neck guy about 1950 or ’51 that went away, sociologically went away. 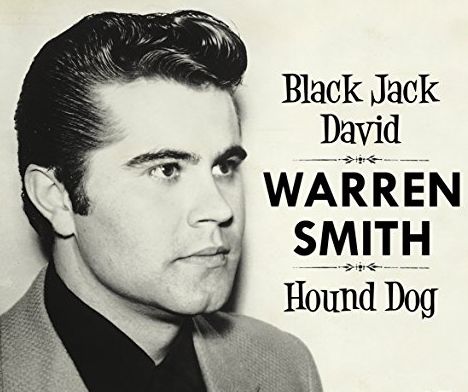 Warren Smith - why must he have done it ? He wasn’t a musician, he could barely even play the guitar four beats to the bar, and he didn’t always change the lyrics on time. He was just barely squeezing it in, yet he was a dynamite performer. A lot of them will say they only knew three or four songs ; of course they knew other songs, but they didn’t know other songs that rocked ! They didn’t know other songs that they could do their thing, whatever it was they were doing, with. It was a unique, tiny little area of music. It’s a nice word that you can hang on other things now, but to what rockabilly really was here, as a kid who was listening to it and trying to see if there was anything...

Okay, when I first saw Elvis : I know people who say their lives were changed musically, whatever, that was when they knew they wanted to do it when they saw Elvis. It couldn’t have been further from my mind. My mother was a musician, and I had already tried to play piano as a kid, different things like that. But seeing Elvis, it never dawned on me that I could do that, it was so special, what he was doing was so special that it just didn’t come into my mind. Seeing Billy Lee Riley, however, was different. Seeing Sonny Burgess was different. You see a guy up there doing what Sonny Burgess was doing, and I thought yeah ! okay, maybe I could do that. Billy Riley too.

Gene Vincent was almost a rockabilly. I don’t think it compares with what was around here, because of the obvious similarity to the early black records on Sun. I think it’s obvious that Sam was trying to get the same type of music out of whoever he was recording. And probably those black musicians were trying to play white, the white musicians were trying to play black and they found a way of crossing over, which was really Sun Records and it made it easier for them.

When that rhythm section was [guitarist] Roland Janes and [drummer] J.M. Van Eaton and [guitarist] Billy Riley and Bill Wilson, the crazy piano player ; I mean damn-nation those guys were killers ! They were all just like Sam says : amateur red-neck electricians or something. Jerks who came in with the Coke bottles. He didn’t care.

A lot of people in Memphis are ashamed of the thing they do well. It’s just a uniform thing about Memphis and music. They’ve just started to realize that they did something, to an extent. But that [shame] is part of what has to be there ! The guitarist is always some guy that’s into playing jazz and he thinks the music is shit. And the singer is a county purist who thinks it’s nigger music or something. That element has to be there or it won’t be real, I think.

CM : It’s a tension between the players ?

JD : Yeah, and it almost has to be an insensitive producer. That commercialized element : it has to come from outside because from inside you’d be able to hear it. There’s got to be some guy there, some jerk who’s going to rattle the change in his pocket and talk about something inappropriate to get it that edgy enough. 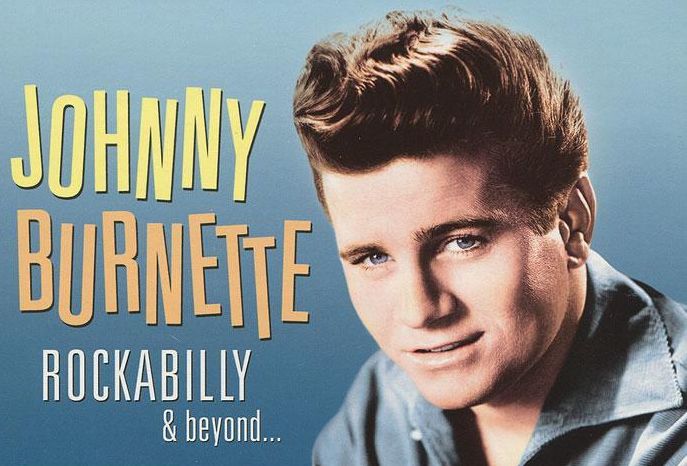 I used to sneak out of my house and go to the Bon Air Club [in East Memphis] and hear the Rock ’n Roll Trio play. [Johnny] Burnette was wilder, he was like Burgess and like Riley, he screamed in a way that I really got off on. That was the way I started singing ; I sing pretty loud myself and they inspired me. Like I said, the arrogance is a real part of it, not just the posture or the vocal attitude, the sound, the aggression that you can hear in real rockabilly. Burnette’s sideburns almost joined at his chin, he was an awful looking individual. Those pretty boy pictures that you see of him are not the way he used to look when he was singing at the Catholic High prom [he had his nose operated on in California]. They were savages ! They really played, and [guitarist Paul] Burlison was a monster ! An older guy, you could tell, he was no teenage kid then, he was obviously very serious about what he did. And Bill Black was no kid, Scotty Moore was no kid.

I call what I do "suburban rock" and was among the actual first to do it. Once suburban rockers came along, the old men and the country guys and the jazz players who were coming at it from all these different angles, playing this bastardized, hybrid music, went off back into their weird places and it all became rock and roll, a kind of one culture thing. But rockabilly was not no one culture thing, ’cause there was always some guy there who didn’t like it. There was always some guy who thought, "We ought to be playing real country music," and there was somebody else who wanted to get a drummer and that was the way it was. All that bitching that you hear them do is part of it. During Burlison’s record they should have recorded the complaining. It would have been a real document of complaining. The trouble with that was that the right players didn’t get together at the right times. The right rhythm section was never really all playing at once.

CM : Some of these guys say rock and roll and rockabilly are the same thing. I get all these different stories.

JD : The term was almost derogatory. It was like the way the punk musicians thought about being called punk musicians. Because these other things started coming out, bullshit stuff, and people called it rockabilly. Hell, Billy Lee Riley didn’t want to be associated with something like that.

to go to the Dickinson family’s music website, where you can read Jim’s last words, click here

I have posted several other interviews with musicians from the 1950s and 1960s. To go to the index page, click here.