Craig Morrison & the Momentz : Live at the Oscar - CD 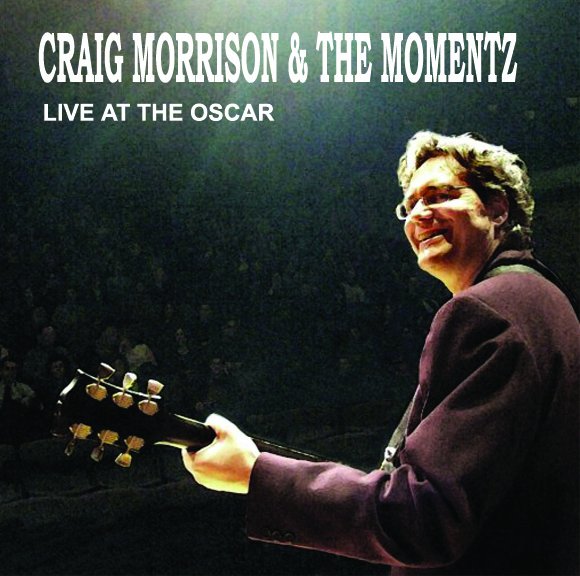 A hot live set from a band that plays rock and roll and its roots, from archaic folk songs, 1940s rhythm & blues, and 1950s rockabilly, to 1960s British invasion and West Coast psychedelic folk rock, plus original songs that extend these traditions.

Buy now from this website : $18 Canadian, includes free shipping from Montreal to anywhere, plus autograph if requested.

If you prefer you can buy it from www.cdbaby.com for $13.03 US and have them calculate the shipping cost. Also you can hear excerpts of all the songs at this website ! Click link below to go to cdbaby.com.

Craig Morrison is an ethnomusicologist involved with rock and roll and its roots as a musician, author, and teacher. He started the Momentz in 1985 after moving to Montreal from Victoria (on Canada’s west coast).

The band’s repertoire is eclectic, including early rhythm & blues and rock and roll (especially rockabilly), and ’60s British invasion songs, garage nuggets, and California psychedelic folk rock, plus some originals. Craig Morrison & the Momentz have been keeping rock and roll and its roots alive for two decades. They have gigged around the city of Montreal and the province of Quebec, performing in all types of venues : nightclubs, hotels, reception halls, radio stations, studios, tents, gazebos, trains, synagogues, outdoor festivals, agricultural fairs, department stores, book stores, subways, hospitals, parks, classrooms, restaurants, and private homes.

This CD, released in 2006, was recorded live (no overdubs !) at one of the band’s Annual Roots of Rock and Roll shows at the Oscar Peterson Concert Hall, named for the legendary jazz pianist who grew up nearby. The series was initiated in 1998, and the concert occurs on the first weekend in February, the anniversary of the death of Buddy Holly. One of the goals of the show is to underline that, despite what Don McLean sings in "American Pie," the music never died.

Morrison wrote what has been called the definitive book on rockabilly, Go Cat Go ! Rockabilly Music And Its Makers, and his latest book is an encyclopedia called American Popular Music : Rock and Roll. He teaches Rock And Roll And Its Roots at Concordia University.

THE SONGS (notes by CM)

1. Good Rockin’ Tonight (Roy Brown). I’m not alone in considering the Wynonie Harris version of this, recorded in the last days of 1947, the first rock and roll record. Elvis Presley also did it in the mid-1950s.

2. Everyday (Charles Hardin/Norman Petty). A Buddy Holly song that was the flipside of “Peggy Sue” in 1957.

3. Break Up (Charlie Rich). A 1950s rockabilly song that was recorded by Rich, Ray Smith, and Jerry Lee Lewis, all pianists that got their start with the famous Sun label of Memphis.

4. Where Have All the Flowers Gone ? (Pete Seeger/Joe Hickerson). Folk music icon Pete Seeger composed it in the 1950s, from lines of a Ukrainian folk song that he had come across in a celebrated war novel by Mikhail Sholokhov called And Quiet Flows the Don. Seeger’s song had only three verses, and when Hickerson heard it, he added two more at the end to make the song’s images form a circle. It became a popular anti-war song, and a hit twice : for the Kingston Trio in 1962, and three years later for Johnny Rivers. I added it to my repertoire after interviewing Joe Hickerson and also Bob Shane of the Kingston Trio.

5. The Cuckoo (traditional, arranged by CM). I’ve been doing this archaic folk song since learning it from a friend in the early 1970s. Janis Joplin is one of many singers who have sung it.

6. A Certain Girl (Naomi Neville). The writer’s credit is a pseudonym for the famed New Orleans pianist and producer Allen Toussaint. Recorded first by Ernie K-Doe, the song was then covered by the Yardbirds in 1964, which is how I first heard it.

7. Every Time You Walk In the Room (Jackie De Shannon). I learned it from a record by the Searchers, a wonderful Liverpool group who were contemporaries of the Beatles.

8. Postcard From Amsterdam (C. Morrison). I wrote it in the famous city in Holland, deeply affected by visiting the Anne Frank house and learning more about how she wrote her famous diary while the family attempted to hide from the Nazis.

9. Famous New Orleans (C.Morrison). When the sound system microphones briefly stopped working during the show, I spontaneously went to the piano and played this and the next track as an unrehearsed duet with the drummer. The piece is my take on a favorite theme of New Orleans pianists such as Dr. John and Professor Longhair.

10. Love Letters in the Sand (N.Kenny/C.Kenny/J.F.Coots). Once Fats Domino showed how, with “Blueberry Hill,” to update old songs by using a loping bass line and piano triplets, lots of people followed his example. One was Pat Boone who redid this 1931 song in 1957 and took it to #1.

11. Himalaya (C.Morrison). An original song, inspired by an album called Festivals of the Himalayas, issued by the Nonesuch label as part of their fascinating Explorer series. The jam includes guitar and piano solos, and, briefly, a bass solo. The psychedelic style comes from my West Coast upbringing. My research on the development of West Coast music in the 1960s will be a future book.

12. Passing of the Train (Jim Rushing/Gene Nelson). I heard it on a terrific bluegrass album by Rhonda Vincent and thought it would work well in rockabilly style.

This CD is 100 times better than the last one you sent me [a rough mix of some live tracks], and the other one was good. The sound, the tones, the balances between voice and instruments is superb-very professionally recorded, especially as this is a live show.

Your choice of order on the CD is right on, starting with a great rocking opening, which got my lady up out of her seat right away. Moving to the slower oldies, to beautiful, romantic tunes, and ending with a nice jumping ditty. The following are some notes I made while listening the first time through.

2. Everyday : not one of my favs but good harmony and great key for your voice. Buddy Holly would be proud.

4. Where Have All the Flowers Gone : love that note slide-down on “all,” brilliant version of a song the Bogtrotters did in 1970/71. Excellent lead guitar, modern with great effects.

6. A Certain Girl : nice touch to middle of CD. Piano solo : 10+. Took me back to â€˜70s and Lighthouse style. Finally heard you talk Craig.

7. When You Walk in the Room : will make the Searchers proud. Very good control of vocals with guitar licks.

8. Postcard From Amsterdam. “She couldn’t touch the trees, but she touched me,” “Jets fly over the birds”-superb, you should write more. What a gift ! Get it to CKUA in Edmonton. Definitely a hit in my books.

10. Love Letters in the Sand : I would be honored playing guitar with you on the piano-nice touch.

Overall Craig I would be proud of that CD if I were you-makings of a few chart stoppers.