Craig Morrison : It seems to me that almost nobody recorded out of that scene. [A remarkable number of recordings—few from official releases however—have been posted on the Royal City Music Project website - here is the link.]

Roy Rhymer : We were trying. As Sheriff did. 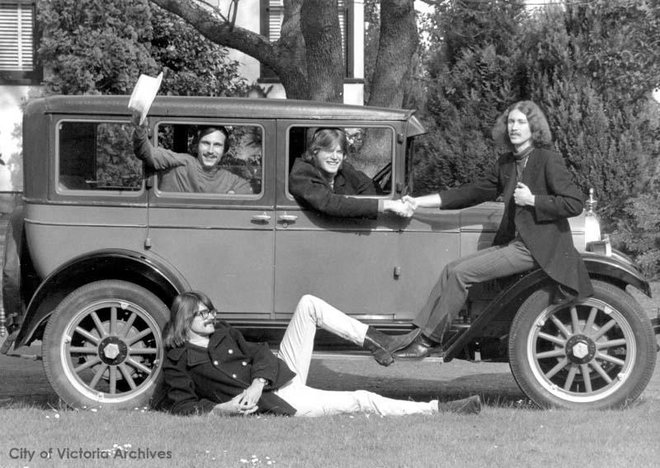 RR : That’s right, it was near the end of it. Where would you record ? There was nothing here.

CM : That’s it : there were no studios to speak of. I think that’s a pity. You guys were recording in your house but that’s maybe a little later. Did you sing when you were in Morning Star ?

CM : Who was doing the lead vocal ?

CM : From the drum stool. That was rare. He had a reputation of being a real strange character. Was he ?

RR : Yeah. Oh, big time. He used to live out in Langford, and talk about a non-conformist. He wanted to run for MLA [a Member of the Legislative Assembly in the provincial parliament]. The RCMP [Royal Canadian Mounted Police] came up and said, “Do you realize what you’re getting into ?” Because he was such a freak, with long hair too. They basically talked him out of doing it because he could get shot, because he was a radical, with his long hair and his views. Hippie views. We were real hippies : non-conformist, non violent, acid, Timothy Leary, spirituality as opposed to making money and going to work.

CM : Harry was a serious hippie. 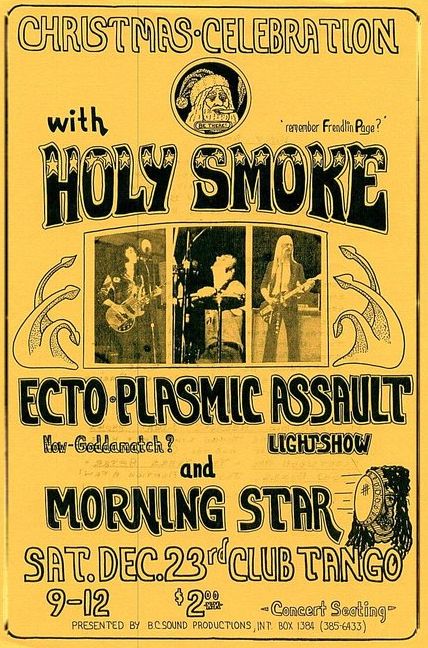 CM : Did that band have a hippie philosophy ? Were you trying to say something with your music ?

RR : Spiritual. Believe it or not it was very spiritual. All of us. We were all heartfelt God-loving people, and God-believing people. All of us believed very deeply. I still am. They are too, I know it. The songs were very spiritual. Even on that tape I sent you, if it’s the one I remember, a lot about God. Well, even our music : playing it was, that’s where it came from, like soul. And the soul was the planet back in the hippie days.

CM : You were presenting that through your music.

CM : Do you think it got through ?

CM : Some of those gigs were pretty loving joyful affairs.

RR : Yeah. Even when I play now, Craig, it is the same thing. Whatever I play, it still comes from the same place. The meditation. Really, seriously. It’s the talent, just being able to do it. You have to feel humble, at least I do. At least you’ve got 10 fingers to be able to do it. No arrogance about it, I just love doing it.

CM : How would you describe your style ?

RR : I’m very influenced by jazz, but with the blues, rock upbringing. But I love jazz, because what I like—which I’m still trying to do—is play over changes, jazz changes. I’m still striving towards it. I love that. I would say rock and roll, blues, definitely classical and jazz orientated. Where David Vidal, for instance, does a lot with creating sounds, I’m a little more technical, go after the scales, but still try and create different sounds. But like more mathematical. He’s more esoteric I guess you’d call it. I think my focus more than his, is definitely mathematical.

CM : So you think in terms of scales and theory. Where did you learn that ? From books ? Were you interested in that right from the beginning ?

RR : Oh yeah. I studied it. Mel Bay ! [Mel Bay is still a major publisher of music instruction books.] Absolutely. I taught myself that, then I was teaching students. Remember Talisman Music Store on Yates Street ? I taught there. Frank Keifer. I taught there when I was 17-18.

CM : It was a very small store.

RR : Yeah, like a hallway. I taught lessons. I think that’s where that came from but that’s why I studied Segovia like that too, from books. Because I loved that kind of playing : right hand, left hand stuff. 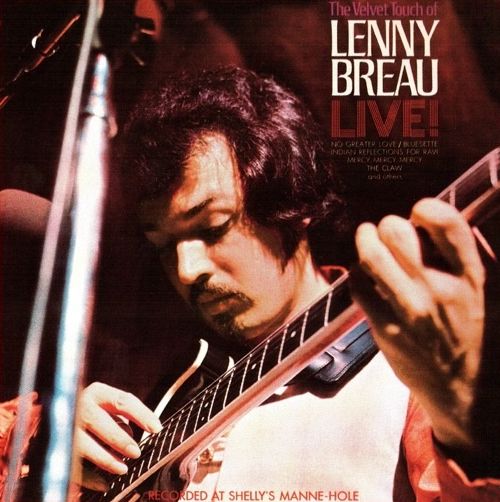 CM : I know you were inspired by Lenny Breau [the legendary jazz guitarist from Winnipeg, 1941-1984]. Do you think Lenny Breau had an influence on the scene here ?

RR : I think to a point ’cause we all listened to him and couldn’t believe that one man could play like that. Never heard him live, never had a chance. I got bootleg tapes from Toronto. I studied the shit out of him. Later on, I had to learn how to play like that. He did flamenco, classical, seven-string guitar. Here’s a story for you. I go down on my honeymoon to California in ’84, and I’m down there for a little over a week and we end up in Laguna Beach and I want to start playing guitar ‘cause I’m missing it, because I didn’t take the guitar with me. Laguna Beach is an artist town, below LA on the coast, a little further south, more towards San Diego. Anyway we go down there and I want to play guitar and don’t have one. So I find this local music store—it’s an artist’s town, there’s not much happening there except the surf. I walk in this music store and say, “I’d like to rent a guitar for a week. I’m going to be here for a week, staying at a motel.” The guy says okay. So he brings out this guitar and says, “Have you got any ID ?” So I bring out my Canadian ID. He goes, “Oh, sorry. School’s just going back and you can’t rent one.” “Really ?” And he said, “Well, you’re from Canada, right ?” I start catching on : maybe I won’t bring it back or something. So I said, “Yeah, I understand. Do you mind if I go in the back room and play it for a while ?” He goes, “No, go ahead.” So I go back in there and I’m practicing Lenny Breau and Joe Pass. I sat there for about two hours. I came back out and I hung the guitar up and said, “Thanks very much.” I started walking out the door and he says, “Wait a minute, come here. You like Lenny Breau ? I heard what you were playing, it sounded great. Come here.” Takes me to the back room. Turns out he’s the guy that built Lenny Breau’s seven-string guitar : Kirk Sand. He owned the store. He shows me these pictures. He sent me up pictures, he sent me up tapes. Lent me his scuba gear. Would not rent me a guitar. [We laugh.] He said it sounded great, nice to meet you. Sorry I couldn’t rent you a guitar but….

[We talked about several other local musicians —“did you know ?” and “where are they now ?” — including keyboardists Morrie Stearns, Bill Sample, Karel Roessingh, and Chris Donison, harmonica player Little Ed Wright, guitarist Sherman Sheldon, bassist Steve Pugsley, and David Foster, the famous producer.]

CM : We’ve just named a lot of people with really stellar musicianship. I was always surprised at the caliber of musicians here in Victoria. Is there any reason for it ?

RR : I know, it’s incredible. There’s so many people from here. Not only musicians, artists and whatever. It is so laid back, maybe you have too much time on your hands.

CM : Maybe because there’s so much rain, people spend a lot of time indoors.

RR : That’s what I’m saying. You’ve got nothing else to do, you’ve got to develop.

CM : You’ve got to craft something, otherwise you go nuts [we laugh].

RR : Exactly, that’s probably not far from the truth. David [Vidal], Norm McPherson, Rob Hollingsworth. Bob Geddes, remember him ? All those guys I had the pleasure of growing up with and learning from. It was pretty neat. It was a wave. Absolutely. I’m really happy to have grown up with the guitar players especially, all those musicians, period. What I was going to tell you was we got our guitars at the same time, right, the ’57 Strat ? Norm got his Les Paul. Bought it in Edmonton. He used to sleep with that thing.

CM : That was a sunburst.

RR : A sunburst, yeah. He used to sleep with it. Anyway, Valdy [the famous folk singer] comes to my shop, I guess about six years ago. When he would come to town I would fix his stuff for him. He goes, “Roy, Norman sold his guitar.” He never left that thing. I went “What ?” He says “Yeah, guess how much he got ? Thirty grand American.” This guy in New York bought it. Norm sold it and bought his house in Windsor [Ontario]. I’d sell mine too if somebody offered me 30 grand American.

CM : Who was at the top level on guitar ? I always thought that you were right up there.

RR : Thank you. But McPherson, Vidal, Geddes, Rob Hollingsworth, all the guys I grew up with. Everybody I played with, Richard Moore in the Blues X Five. He was not really in the limelight but a talented man. Those guys were on top and they still are, as far as I’m concerned.

CM : They all emerged within two or three years of each other. Everybody came up at the same time. This is one thing I’m going maybe have a little bit of trouble describing well in my book ’cause there’s almost no recorded evidence. We’re talking about a scene that had an incredible force and there’s no record of it. We just have a few posters of dances.

RR : I don’t know what it was. It was just a sound. When David came out from back east as a guitar player he brought a certain sound with him, the East Coast sound.

CM : How can you tell when you hear the West Coast sound ?

RR : I don’t know what it is but you can definitely tell the difference. A little more laid back, earthy. Not so many big cities, like on the East Coast : New York and Toronto. There’s LA, Seattle. Vancouver’s not a real big city, but you get out here and it’s real calm.

CM : There’s a gentleness about it, but you guys like many others got into the harder material too. Nonetheless, in a lot of what was done here I think there was a difference. It’s kind of country rock without actually having strong country roots. People aren’t doing Bill Monroe songs or Carter Family songs. Well, we heard a Carter Family song today [at the jam session], “Will the Circle Be Unbroken” – those guys jammed on it. These guys, they’re country rock but it doesn’t sound like Nashville. You’re right - there was a West Coast thing.

RR : Yeah, definitely a difference. I have no idea how to identify it. You can feel it. 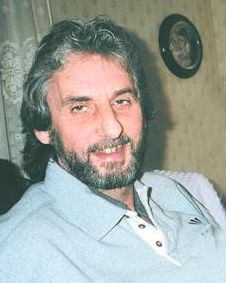 postscript : Roy Rhymer died August 22, 2019. From his obituary in the Victoria Time-Colonist newspaper : "It is with shock and deep sadness we announce this passing after a short illness. A true icon of the Victoria music scene, dating back to the ’60s. Roy was born in Belfast, N. Ireland and, proud to be Irish, returning twice, in ’63 for 6 months, and a vacation in 2016 to return his Mother home…. Once discovered, his passion for guitar never wavered… He soared at his craft with his own classic style, earning mutual respect amongst his peers. Also an electronics wizard, repairing musical equipment…. Roy was a proud, caring, loving father… a protective brother who loved his family and friends unconditionally. He loved a good joke and to have a good laugh with his own wit thrown in, an all-round fun nice guy. He had the knack for making people feel at ease with his gracious spirit. He will definitely leave an enormous hole in the hearts of many."