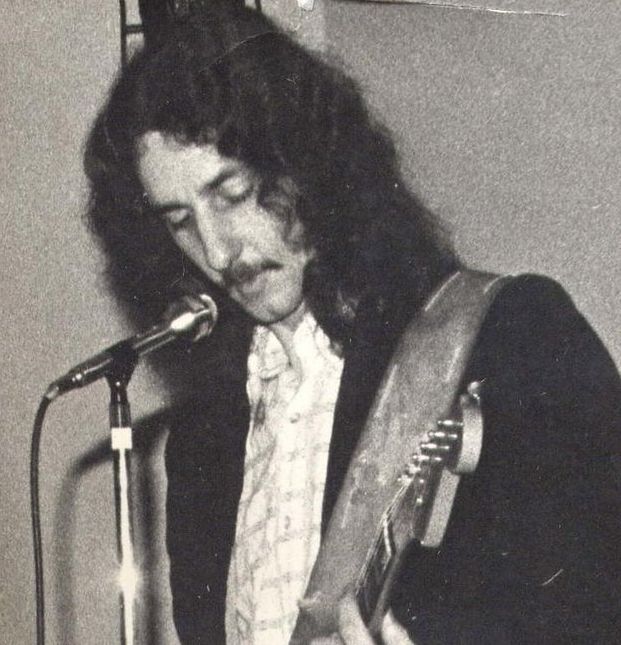 Roy Rhymer was one of the local guitarists I looked up to when I was a teenager growing up in Victoria, British Columbia, Canada. His career parallels the musical evolution of the times : starting in surf bands, getting caught up in the British invasion and then the hippie influence from California, a return to earthiness and deep exploration of the guitar’s possibilities, and into the commercial viability of nightclub bands. During our discussion, the vibrant but largely unrecorded Victoria scene is recalled, as well as some of the excellent musicians that contributed to it. The interview took place on a warm day in 1999 in Victoria after an afternoon jam session at the James Bay Inn, while we sat in my car in Beacon Hill Park, looking over the Straight of Juan de Fuca to the Olympic Mountains and the city of Port Angeles in Washington State.

Most of the photos come from the Royal City Music Project website, devoted to the history of Victoria’s rock and roll music scene.

Craig Morrison : Yes, we thought that didn’t we ? You’re nearly three years older than me. We’re just middle-aged now. When did you get your first guitar ?

RR : We came over here to Canada when I was a year old. I lived in Ottawa and then Vancouver and then here when I was four. I went back to Ireland when I was 12 and I got the shit kicked out of me. It was bad, first day. They thought I was American ; they hated Americans there. I stayed there a little less than a year. I went to school there and it was great. A wonderful place. When I was over there I was seeing things there that hadn’t made it here yet. I remember Lulu. I went to a dance hall ; I was 12 years old. I can’t remember what she did at her show. While I was over there it was starting to happen. It didn’t dawn on me until I got back here that it hadn’t made it here yet. When I got back I wanted a guitar. I got my first guitar when I got back from Ireland, when I was in high school, about 14.

RR : Yeah, just after Kennedy got blown away. Got it at Woodward’s, a Zenon electric. Half a baseball bat sawed in half for a neck. The strings were this high off the fretboard.

CM : I still play that one. We put a slow funk beat to it. I never stopped listening to ’60s music.

RR : Me neither. I stopped listening to AM radio because rap didn’t appeal to me. It’s got its merit obviously to other people, but I’m a little older.

CM : There’s an oldies station on the clock radio at home where I’m staying. It’s not just an oldies station, it’s a ’60s oldies station, and pretty heavily ’64-’65-’66. It’s almost too much, they’re too familiar those songs. They play for five seconds and I can name every one of them. And they’re not the greatest songs, some of them, you just know them.

RR : It’s funny you brought this up ; it never leaves. I listen to KPLU ’cause it’s blues and jazz.

CM : Where did you do your first gigs ?

RR : CYO dances : Catholic Youth Organization. I’m not a Catholic. Never was, I’m Protestant. I was born in Belfast for Christ’s sake. I’ve been playing since I was 16. After about two years, three years, we were playing gigs. We were called the Town Criers, something like that. I did my first 45 when I was 16 or 17 : “Lucille.” It was at Macy Sound, an actual 45. It was the Town Criers or the one before that with no name. It’s like an old 78, that’s how bad it is. We made it just for ourselves. We were just kids and we thought we would do this.

CM : An acetate, just one copy. When was the last time you heard it ?

RR : Oh, 30 years ago. It was hilarious. I sang ! It was our first record, I’ll never forget it. What I remember was the feeling. Oh, it felt great to me. I think I did the solo on it too. I can’t remember what that was like but it’s probably pretty funny. My first taste of listening to yourself back. Before tape.

CM : I got my first guitar in November ’66. The night I met you, I think it was ’69, you were with a gang of four or five of your friends at your house on Princess Avenue. I was out with a couple of guys and one of them knew you. We just stopped in at your house. You were very welcoming, and that impressed me so much. We were younger, but you just took us in. You were very hospitable. It was great.

RR : That’s wonderful. There were a lot of people that went in and out of that house, I’ll tell you. 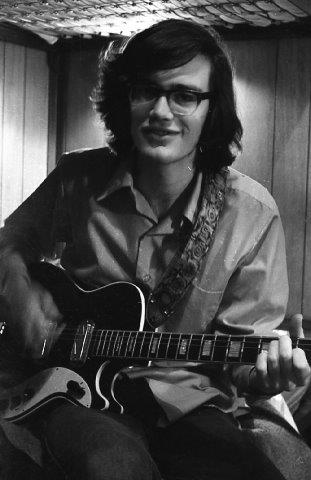 photo - Craig Morrison in 1971 with the Silvertone guitar Roy told me about.

CM : Another time you also showed me some things on the guitar. It wasn’t anything dramatic, but it was a kindness. Another good thing that came out of that circle was I wasn’t happy with my guitar and you told me about one of your friends, Joey, who was selling a guitar. I later went to his place and I bought it. It was a Silvertone.

RR : Was it a black Silvertone with a big white pick guard around the bottom ?

CM : Yes. I bought it and it was an incredible improvement over the first guitar I had. It was the same price. I paid $35 for the first one, and it was crap. And I paid Joey $35. Wow, for the same amount of money you can get something that’s so much better !

RR : Yes, that was a nice guitar. I used that a few times. That was a good guitar, I liked it. For its day it was fine. I thought that it had a pretty good sound.

CM : It was fine. The action was low. I don’t know if it had a good sound but you could play it.

RR : Gretch, Silvertone, Gibson SG. I went through them all. I ended up with a ’57 Strat, it was a good deal. I still play Strats but I was looking for a Les Paul. I had one for a couple of years. They’re wonderful. Do you remember Norm McPherson ?

RR : He and I got our guitars about the same year. He found his in Edmonton. I found mine in Bellingham [Washington]. 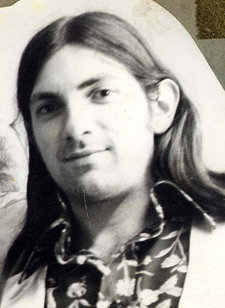 Dave Vidal, from Royal City Music Project : Victoria Music Hall of Fame Inductee 2010 : Most Influential Musician 1970-1979. A “guitarist’s guitarist”, Dave Vidal has played with blues greats Taj Mahal, Lowell Fulsom, John Hammond Jr., Big Joe Duskin, Amos Garrett, and many others. A master of tone and phrasing, Dave is regarded as the “King of the Blues” by many of his peers. And if this wasn’t enough – Dave is also known all over the world as being a Tube-Amp specialist, counting everyone from Bryan Adams to AC/DC among his clients.

RR : No. Actually a friend of ours, Dave Vidal, turned me on to it around ’69-’70. [Guitarist] Lenny Siemens was coming back from the States, happened to pass through this music store in Bellingham, and there’s a Strat. He came back and told Dave ; Dave told me. So I rented a car and Dave and I went down. I got there and it looked beat up like you wouldn’t believe. It looked like [Eric] Clapton’s on some of his albums, with a maple neck that’s worn into blackness. But beat up, only half the frets were there : some of the frets were only one half. So I said to this guy, “How much do you want for this ?” I think the price was $400. “Will you take $300 ?” He goes, “Ah yeah, okay.” I said, “Is that with the case ?” He goes, “Yeah, okay.” So he took it down, put it in the case and wrote me out a receipt for the border. With tax it was $315.20, but he wrote the one really small. We get to the border and the guy said, “Do you have anything to declare ?” I said, “Yeah, I’ve got a guitar in the back.” He opens it up and he looks at it and laughs ; it’s all beat to shit.

CM : Were you already repairing guitars and changing frets ? Dave was into that. He worked on my guitar once, refretted it.

RR : Dave’s the best, absolutely. He does Bryan Adams’ guitars and all those guys. He’s got a very good name, and so he should. I never did repair guitars. I do electronics, I never did woodwork. 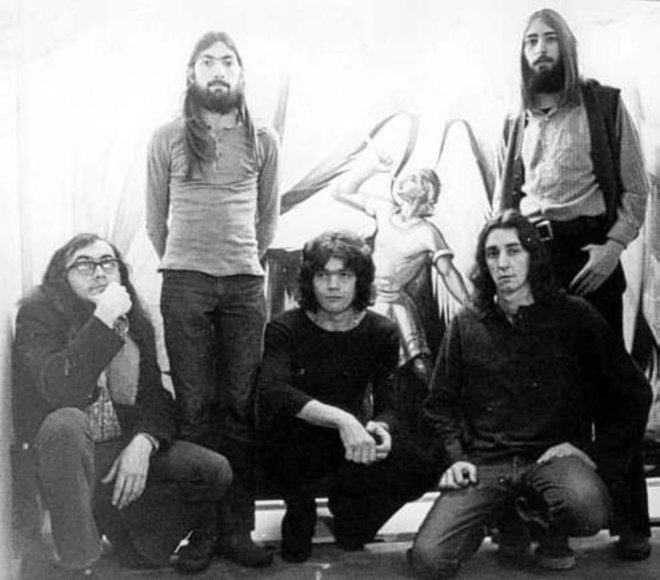 RR : Dave [Vidal] and I were both playing guitar and Don Chandler was playing bass and Harry [Creech] was playing drums. They had been in a band before that called the Lost Souls. After, it changed to Morning Star. I think it was David, Don Chandler and Harry at first. David and I became friends and started playing together. I think there was just a three-piece, then they brought me in to play guitar. I don’t think they were happy with Don’s playing, so I decided to play bass. David came up from Toronto, he was a star, still is. He had a totally different technique : definitely East Coast - the string bending of Dominic Troiano and all those guys. There was no string bending out here, not like David Vidal. He came out here he showed everybody out here how to play guitar. The Traynor amps. There was nobody like him.

RR : Fucking rights he did. David’s made his mark out here I’ll tell you. We started trading music ; I would introduce him to classical and jazz. David had a Strat with a Tele neck on it. That never happened out here. David used to wear steel guitar players’ metal finger picks. That never happened out here. He hit harmonics like you wouldn’t believe. There’s not one guitar player in my era that he did not influence. He brought that style out here as far as I’m concerned. That’s what he heard when he was out there, that’s how he played. He’s a monster.

CM : How do you think they got that in Toronto ?

RR : Well it was Robbie Robertson and Dominic Troiano [each played at one time with Ronnie Hawkins].

RR : We went to high school. We were at Vic High [Victoria High School], probably ’67-’68. I don’t remember how we met but we did start playing together and started trading off stuff, and another guy, Richard Moore, Dick Moore, in the Blues X Five [pronounced “blues by five”]. He played guitar as well. Me and Richard and David became very good friends.