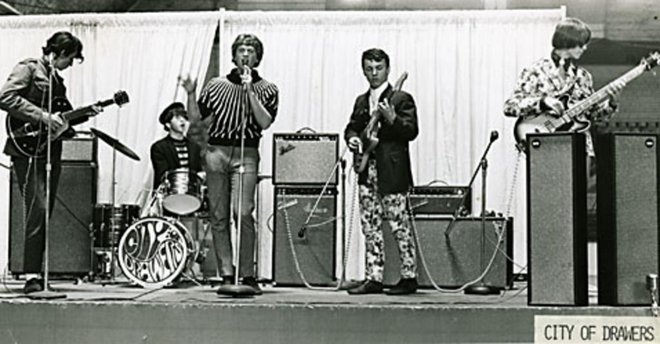 Craig Morrison : So you had a band between the surf band and Morning Star ?

Roy Rhymer : City of Drawers. (Roy is on the left in the photo.) Why people liked us was because of our material, ’cause we would do the Yardbirds, the weird Who songs. It wasn’t the blas ? stuff, it was more challenging. Which is why Richard Moore, David Vidal, and I all got along.

RR : Yeah, you could kick your amplifiers.

CM : Did you ever kick your amplifiers ? Actually kick it with your foot ?

RR : Oh yeah. Many times ! I had a Silvertone that went with that black guitar. Reverb turned up full : “Happenings Ten Years Time Ago.” Kicked the shit out of it, are you kidding ?

CM : You must have had your Beatle haircuts by then.

RR : Getting long. Got kicked out of school for that one. The principal would come down to Vic High and come up to me as I was walking down the hall and say, “Get your hair cut or don’t come back.” So after the third time he told me that I didn’t come back. I took a year off. I went to adult studies, put myself through school, then I went into electronics.

CM : Getting kicked out of school for long hair !

RR : Yeah, but it wasn’t long. It was nothing like this but it was just above the ears. Those were the days.

CM : Do you remember the Pharaohs ?

RR : Oh yeah, the Pharaohs were big time when all the Battles of the Bands were around in ’66 and ’67. 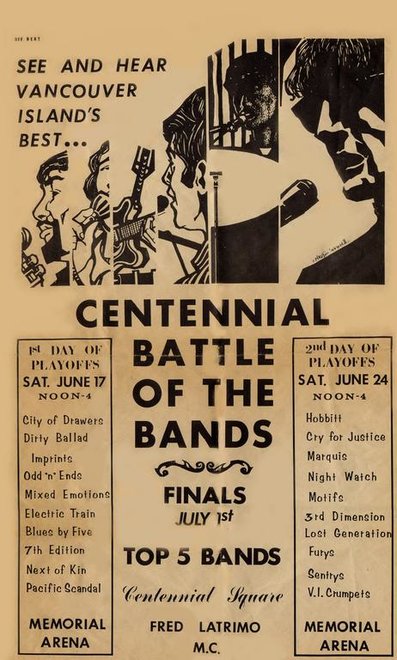 CM : Did you ever play in the Battle of the Bands ?

RR : Of course, every year. Whatever there were, about two or three years. Five times a year. Whenever the Battle of the Bands were I was in it.

CM : I remember one they had at the Memorial Arena.

RR : I was there, with City of Drawers.

CM : When Morning Star was happening, what other bands were on the scene in Victoria at that time ?

RR : As Sheriff and Holy Smoke.

CM : Holy Smoke was [guitarist] Grant Gislason. He was in my grade at school one year. He was really good. It was a really active scene when you think of it, and a lot of those guys have stayed with it. Made careers in music.

RR : I think most of those guys, well, some are dead, that were playing back then are probably still playing. 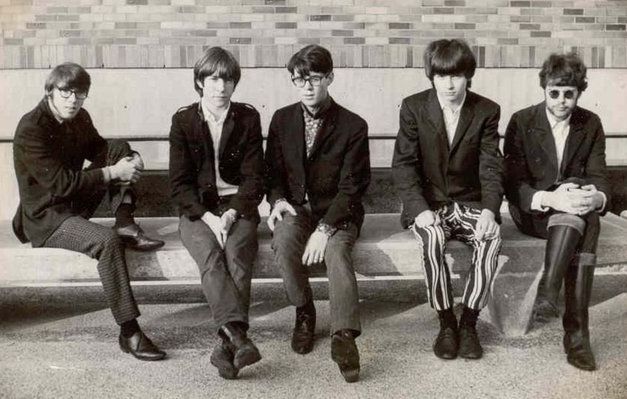 CM : Some guys are still playing and some are in the business in some other form. I guess your first competition was Blues X Five and As Sheriff. I always remember Moxie but they came out of Blues X Five. I remember those bands as being the three best bands in the city : Moxie, As Sheriff, and Morning Star. Then there were other bands which we saw occasionally, like Gulliver’s Travels or the Black Snake Blues Band.

CM : He was in May Blitz [as was Jim Black]. Those albums [that May Blitz made in England in 1970 and ‘71] are collector’s items. I remember seeing bands in church basements, Sancha Hall [in Sidney], Club Tango, all over the place. What was it like for you ? Did you play a lot ? Did you make any money ?

CM : Did you live with any of the guys ? Was it a communal scene ?

RR : Me and Harry and Dave did.

CM : Where was that house ?

RR : On Fort Street. Just above Cook, down from Craigdarroch Castle.

CM : Did you practice more because of that ?

RR : Are you kidding ? When we felt like it when everybody was there, we’d start in the afternoon and we’d play all through the night. All night long. Almost every day. We made a lot of tapes. I still have them. We recorded all night long till 6 or 7 in the morning, then we’d go to sleep.

CM : You sent me one tape that was from about ’72. That band was together for years.

RR : You’re right, probably early ’70s, ’cause I know I went on the road with a different band after that, about ’74.

CM : So you were doing the rock and roll lifestyle ? 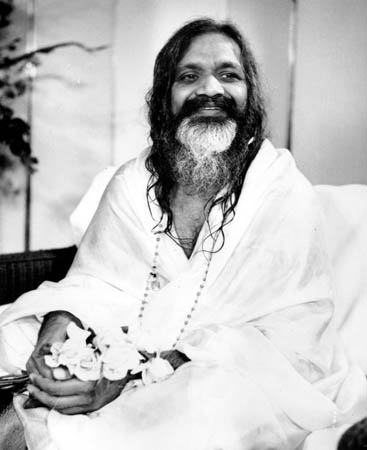 RR : I wasn’t doing so many drugs. I was meditating. Transcendental Meditation, but then I started doing them.

CM : I got into TM too. I went to see Maharishi when he came to town. [Maharishi Mahesh Yogi came to Victoria around 1968 and gave a public presentation in the gymnasium of Central Junior High School.] Did you go ?

RR : No I didn’t go when he was here. But that’s what I was doing. Then me and Dave used to come down here [Beacon Hill Park] and do acid and just sit and stare at the water and whatever else. We got lost at the rifle range one day, a military target range. Stoned on acid, me and him and a couple of other guys. We were walking around. They found us. “What the fuck are you guys doing walking around here ?” All we could do was to sit there and smile at them. He goes, “Don’t be so goddamned placid !” Stoned out of our trees. They drove us out of there. They had no idea. We were only 19.

CM : So that affected your music too ?

RR : I think so. Hendrix came out. With the drugs and all, it became so intense, trying to make different sounds like Hendrix.

RR : Quite a bit, definitely.

RR : No we were playing originals.

CM : But with the Hendrix flavor ?

RR : Oh yeah. David was incredible at that, just incredible.

CM : The tape you sent me was pretty much country rock, and that’s not the way I remembered you guys sounding.

RR : That was later on. We were trying to be commercial. ’Cause the other stuff we were playing was not commercially feasible. It was too off the wall. You couldn’t get a gig. It was too heavy. I remember what tape I sent you. We became a little more back to earth. Other than that we’d be right out there.

CM : So Hendrix was a big influence. What else ?

RR : California, that scene. Moby Grape, Spirit, all those bands. We used to sit in my bedroom and put headphones on and just crank it up. Harry was right into Zappa. I couldn’t stand him. I never really did get into Zappa until later on. But a brilliant man. 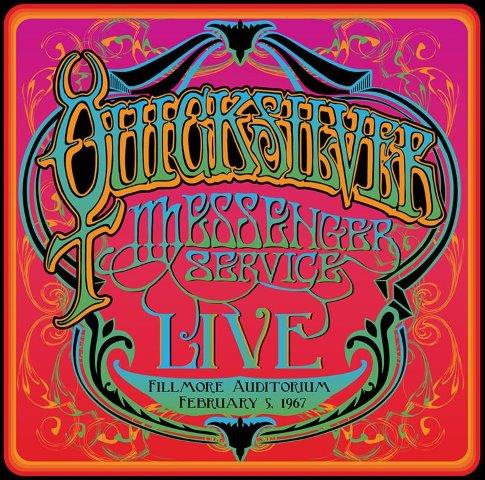 CM : That’s what I really liked too. I was crazy about Moby Grape and Spirit. Were you into Quicksilver too ?

RR : Not me so much. That never appealed to me, I went more the other way, like Segovia and Wes Montgomery.

CM : That’s where you got into the guitar, and the guitar is a total world.

RR : Yeah, I got into the guitar is what it was. The bands, especially Quicksilver meant nothing to me. [I loved them - see my interview with Gary Duncan of Quicksilver Messenger Service here.] I couldn’t stand that kind of playing. I know they were good players, but I couldn’t stand it. The string bending was off key. They couldn’t bend the string correctly if they tried. That tone, I hated it.

CM : When you were bending, what were you bending to ? A tone above or semi-tone above ?

RR : Whatever. Semi-tone, tone, tone and a half, two tones, whatever.

CM : But you were aiming for somewhere.

RR : Yeah, well so were they but they never did and it came out on record and I couldn’t stand it. They just grated me. Dave was flawless in his string bending. But it was East Coast stuff. Back in those days, rhythm and blues, like David Clayton Thomas.

CM : It was hard, and black. There was a bit of a black scene in Vancouver. A lot of bands had black singers.

CM : Jason Hoover. There were others too. It was rhythm and blues. We didn’t really have that in Victoria.

RR : Not a lot, no. Couldn’t afford it. The big horn bands. There was nobody here that could form horn bands.

CM : The bands you’re talking about, there’s a little more Los Angeles in them than there is San Francisco. Like Moby Grape : one of the guys is from LA, and two other guys are from the Pacific Northwest.

RR : But their guitar playing was totally different than the guys in San Francisco. San Francisco had that fuzz tone thing that I just couldn’t stand. Just too much sustain. It was too much, and they couldn’t play worth a shit anyways. There was just something about it that irked me.

CM : The guys from LA had more of a showbiz approach and a more of a crafted approach to composition and they were more into vocal harmonies. Whereas you get some in San Francisco, when they sing harmony it’s like Jefferson Airplane, it weaves in and out. What about Garcia ? 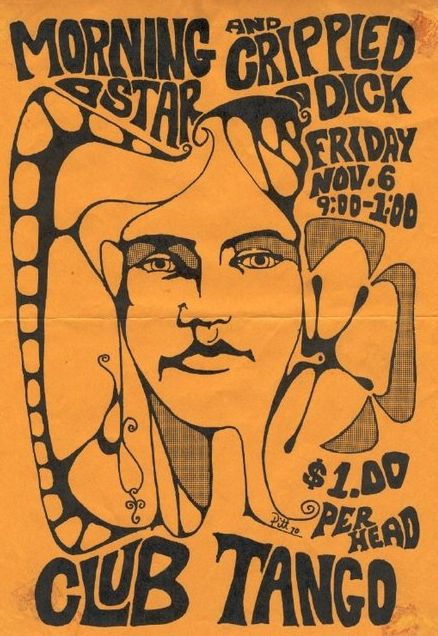 RR : Oh, loved him. Not really in the early days but later on when he became more down to earth. Jerry Garcia was one of those [from] San Francisco that I couldn’t stand until he started becoming more commercial, like when he plays steel. Honest to God that’s how I felt, I couldn’t stand those guys. What was that place called in San Francisco they all played in ? The Fillmore. That was a scene down there obviously. I never made it. Kind of like the [Club] Tango here, but bigger.

CM : I remember going to the Tango. It was upstairs and there was a downstairs club called the Purple Onion. The Tango had a balcony. They did the light shows from there. You played with light shows a lot I guess. .

RR : Oh yeah. Yeah, it was quite the scene. It was the place.