1) Come you ladies and gentlemen listen to my song
I’ll sing it to you right, but you might think it’s wrong
May make you mad, but I mean no harm
It’s just about the renters on Penny’s farm

3) Hasn’t George Penny got a flattering mouth
Move you to the country in a little log house
Got no windows, put the cracks in the wall
He’ll work you all summer and he’ll rob you in the fall

5) Here’s George Penny he’ll come in town
With his wagon load of peaches, not-a one of them sound
Got to have his money or somebody’s check
Pay him for a bushel and you don’t get a peck

6) George Penny’s renters, they’ll come into town
With their hands in their pockets and their head hanging down
Go in the store and the merchant will say
"Your mortgage is due and I’m looking for my pay"

1) Well the funniest sight I ever did see, was long Lost John from Bowling Green
No hat on his head, no shoes on his feet, beggin’ the womens for his bread and meat
One woman says “how much can you eat ?” 49 biscuits and a hunk of meat
He’s long gone

2) Lost John went into a burlesque show, he got him a seat on the very front row
The girls come out to do the dance, they hauled John away in an ambulance
He’s long gone

3) Lost John’s got a gal and her name is Liz, she’s not good lookin’ and an awful fizz
Got arms like a blacksmith, foot like a ham, dumb as a mule and from Alabam’
Hump on her back, has one cork leg, wart on her neck as big as an egg
One eye’s green, the other is blue, her hair is false and her teeth are too
He’s leavin’ home

4) Lost John standing on a railroad track, waitin’ for a freight train to come back
Freight come along just skippin’ and a flyin’, he missed the cow catcher and caught the blind
He’s long gone

TOM DOOLEY
by Grayson and Whitter, 1929 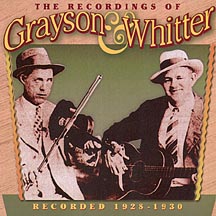 I CAN’T KEEP MY WHEELS ON THE GROUND
by Buck Griffin, 1963

3) I like my gal she’s as sweet as she can be
But she’ll never, get her claws into me
My baby’s mad at me because I’m fancy free
and I can’t keep my wheels on the ground

1) My name is John Johanna, I came from Buffalo town
For 9 long years I’ve travelled this wide wide world around
Through ups and downs and miseries and some good days I saw
But I never knew what misery was ’til I went to Arkansas

2) I went up to the station the operator to find
Told him my situation and where I wanted to ride
Said hand me down 5 dollars, a ticket you shall draw
That’ll land you safely railway in the state of Arkansas

4) I followed my companion to his respected place
Saw pity and starvation was pictured on his face
His bread was old corn dodgers, his beef I could not chaw
He charged me 50 cents a day in the state of Arkansas

5) I got up that next morning to catch that early train
He said "don’t be in a hurry lad, I have some land to drain
You’ll get your 50 cents a day and all that you can chaw
You’ll find yourself a different lad when you leave old Arkansas"

6) I worked six weeks for the son of a gun, Alan Catcher was his name
He stood seven feet two inches, as tall as any crane
I got so thin on sassafras tea I could hide behind a straw
You bet I was a different lad when I left old Arkansas

7) Farewell you old swamp rabbits, also you dodger pills
Likewise you walking skeletons, you old sassafras hills
If you ever see my face again I’ll hand you down my paw
I’ll be lookin’ through a telescope from home to Arkansas

Thanks to Catherine Yronwode (see her Blues Lyrics and Hoodoo website) and Stuart Filler for help on the lyrics.  Stuart Filler adds : the swamp rabbit is "the largest member of its genus, the cottontail family"—famous for the incident with Jimmy Carter, and "sassafras is used for a tea...The highest concentration [of the plant] occurs in Arkansas and Missouri." 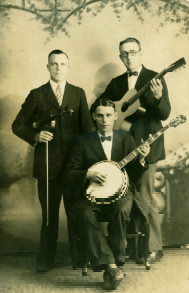 2) Roosevelt in the White House, he’s doing his best
McKinley in the graveyard, he’s taking his rest
He’s gone, a long, long time

3) Hush up little children, now don’t you fret
You’ll draw a pension at your papa’s death
From Buffalo to Washington

4) Roosevelt in the White House drinking out of a silver cup
McKinley in the graveyard, he’ll never wake up
He’s gone a long, long time

5) Ain’t but one thing that grieves my mind
That is to die and leave my poor wife behind
I’m gone a long, long time

6) Look here, little children, (don’t) waste your breath
You’ll draw a pension at your papa’s death
From Buffalo to Washington

8) Came the train, she’s just on time
She run a thousand miles from eight o’clock ’till nine
From Buffalo to Washington

10) Look-it here you rascal, you see what you’ve done
You’ve shot my husband with that Iver-Johnson gun
Carry me back to Washington

11) Doc’s on the horse, he tore down his rein
Said to that horse, "You’ve got to outrun this train"
From Buffalo to Washington

2) The story runs so it all begun with Satan’s smoke and fog
a love triangle was the first, then a razorback wild hog

3) A son and daughter fell in love, the parents they made strife
she tried to elope but they brought her back she could not be his wife

4) Election come with a little rum, made anger in their breast
they murdered one of their fellow men and laid him down to rest

5) Was all in Dingle county, a little mountain state
in the hills of West Virginia where many met their fate

6) The trouble grew until they drew their weapons and took aim
And many noble men they fell, the parties all were game

7) For 20 years the blood and tears, they flowed until we see
a friend who stepped upon the scene, the son of Galilee

8) In mountain shacks we hear the smack, congatulations paid
peace now is reigning in the hills, a marriage it was made

SOLDIER’S JOY
by Gid Tanner and the Skillet Lickers, with Riley Puckett and Clayton McMichen, 1929 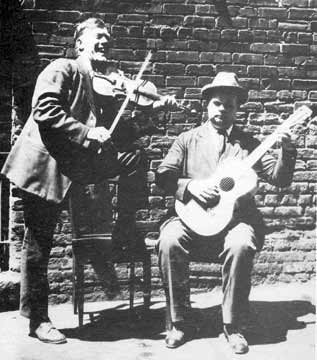 Gid Tanner and Riley Puckett of the Skillet Lickers

(spoken) "Well folks, here we are again the Skillet Lickers, red hot and raring to go. Gonna play you another little tune this morning. Want you to grab that gal and shake a foot and moan. Don’t you let them dance on your new carpet, you make them roll it up."

1) Chicken in a bread tray scratchin’ out dough
Granny will your dog bite, no child no
Ladies in the center and gents catch air
Hold her Newt, don’t let her rare

2) Grasshopper sittin’ on a sweet potato vine (3x)
Along comes a chicken and says "you’re mine !"